However, improper use of JWT can adversely affect application security. We will give examples of using JWT, analyse common errors in implementing authentication schemes using JWT, consider the main types of attacks on these schemes, and give recommendations on how to prevent them.

This section covers the notion of JSON Web Tokens, what they consist of, how they are exploited for user authentication and what the advantages are of JWT compared with a classic authentication scheme using sessions.

In accordance with RFC-7519, JSON Web Tokens (JWT) are one of the ways to display data for its transfer between two or more parties as a JSON object.

As a rule, JWT consists of three parts:

There are exceptions when JWT lacks a signature. This case will be reviewed later.

Each of the parts — header and payload — is an ordinary JSON object that needs to be additionally encoded using base64url algorithm. Afterwards, the encoded parts are connected with each other and, based on this, a signature is detected that also becomes a part of the token.

Generally, a token looks as follows:

You can see that the token has three parts divided by dots (picture 1). 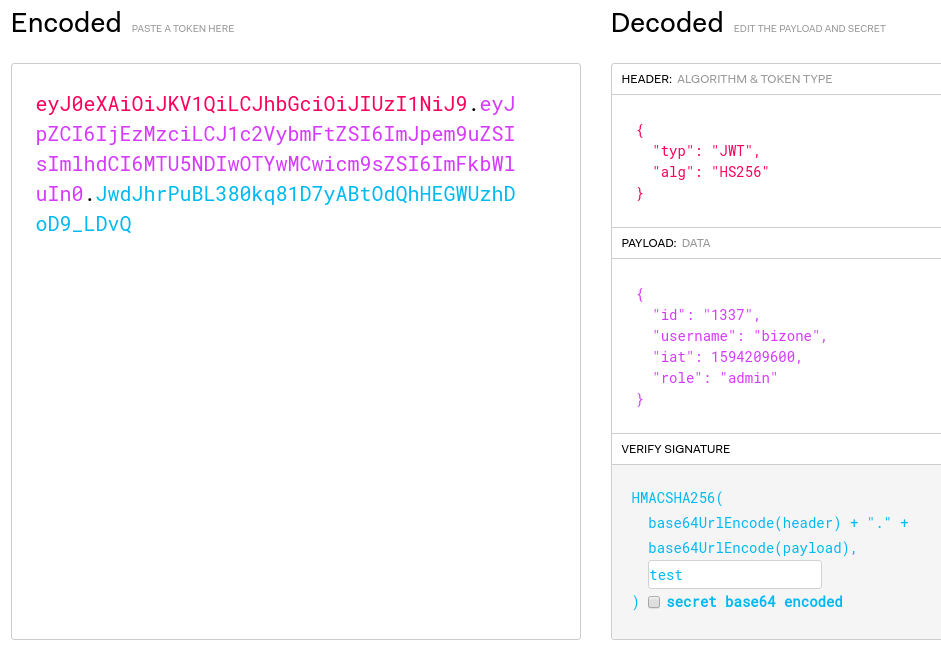 Red text is the header:

The purple part is the payload:

The blue part is the signature:

Let us examine the details.

A header is a service part of the token. It helps the application to define how to process the received token.

This part is a JSON object and has the following format:

Here are the following fields:

The value of the filed “typ” is often ignored by applications, however the standards recommend to take it into account to provide backward compatibility.

“alg” field is obligatory. In this case HS256 (HMAC-SHA256) algorithm has been used in which a single secret key is used to generate and verify the signature.

“none” algorithm shows that the token has not been signed. In this token there is no part containing a signature and it is impossible to define the authenticity of such a token.

Payload carries any information that helps an application to somehow identify the user. Certain service fields can be transferred additionally but none of them are obligatory, and we will not dwell on them.

In our case the payload contains the following JSON object:

In this payload there are the following fields:

The signature is generated as follows:

The signature and payload parts are encrypted by base64url algorithm and afterwards united in a single box using a dot (“.”) as a divider.

On a pseudocode this algorithm looks as follows:

The application after receiving JWT from the user calculates the value of the signature and compares it with the value that has been transferred in the token. If these values do not match, it means the token has been modified or generated by an untrusted party and the application will neither accept nor trust such a token.

The signature of the token in the example can be verified using “test” secret key, for example, on jwt.io

Authentication using JWT is quite simple.

A user inserts his\her login data in the application or a trusted authentication service. In case of successful authentication, the service grants a token to the user containing information about this user (unique identifier, full name, role, etc.).

When further addressing the application, the token is transferred in the user’s requests (in cookies, request headers, post- or get-parameters, etc.).

What are the advantages of using JWT compared with a classic authentication scheme using sessions?

First, token use makes it possible not to store information about all the issued tokens. When a user addresses the application, he\she transfers their token. The application verifies the signature and extracts necessary fields out of the payload.

Second, the application does not have to issue and verify tokens by itself, as a separate authentication service is often used for these purposes.

The factors above resulted in JWT authentication scheme being widely used in various corporate applications. Such a scheme is especially popular in applications using microservice architecture. With this approach, each service gets necessary user data directly from the token and does not waste time on acquiring this information from the database.

This section will review the main attacks on JWT and recommendations will be given on how to prevent such attacks.

First, as JWT is transferred openly, it is enough to apply base64UrlDecode function to the payload part to receive the initial data stored there. Obviously, a criminal having captured the token, will be able to extract the user’s data stored in the token.

In order to avoid such a threat, the best practice is to:

Second, the criminal having captured a token will be able to reuse this token and access the application on behalf of the user whose JWT has been captured.

The recommendations here will be as follows:

Access token in this case has a limited lifespan (e.g., 1 minute). Refresh token has a longer lifespan (day, week, month) but it is one-off and serves only to renew the user’s access token.

The authentication scheme in this case looks as follows:

In case of symmetric algorithm for signing JWT (HS256, HS512, etc.) a criminal can try to match the key phrase.

Having done so, the criminal can manipulate the JWT tokens like the application does and therefore can get access to the system on behalf of any registered user.

In our example (see part 1 of the article) a “test” box was used as the key phrase to sign JWT. This key phrase is simple and short and can be found in all the main dictionaries for passwords mining. A criminal can easily match the key phrase using John the Ripper or hashcat.

In this case the recommendations are as follows:

As we have already mentioned in the first part of the article, use of “none” algorithm in JWT header shows that the token has not been signed. Such a token lacks a part with the signature, and it is impossible to verify authenticity of this token.

Let us review a similar attack in our example. Our non-coded token looks as follows:

Suppose, we want the application to regard us as an administrator. We need, therefore, to change the field “role” in payload for “admin”. But if we introduce these changes in the token, its signature will become invalid and the application will not accept such JWT.

To bypass this security mechanism, we can try to change the field “alg” in the token header for “none”. Our token will look as follows:

As we are using “none” algorithm, there is no signature in this case. Our encoded JWT will look as follows:

This token will be sent to the server. A vulnerable application, after checking the JWT header and detecting “alg”: “none”, will accept this token without any verification as if it were legitimate, and as a result we will gain administrator rights.

As methods of precaution against such attacks:

In case of using asymmetric algorithms for token signature, the signature shall be performed using a private service key and signature verification — using a public service key.

Some libraries used for working with JWT contain logical errors — when receiving a token signed with a symmetric algorithm (e.g., HS256) a public service key will be used as a key phrase for verifying the signature. As a public service key is not secret data, a criminal can easily get it and use for signing own tokens.

To review this example, we will require a new JWT:

When encoded, it will look as follows:

As in this case we use RS256 algorithm for signature, we will require both public and private keys.

For tests we will utilise jwt.io (picture 2). 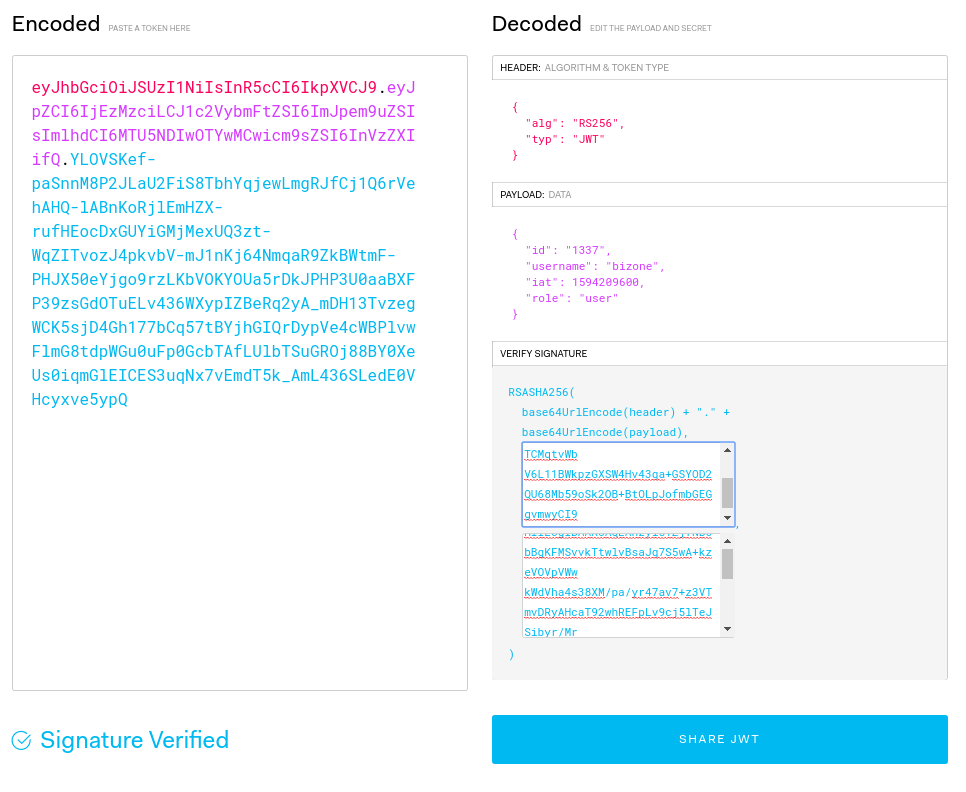 As in previous example, we modify the token:

When encoded, the header and payload look as follows:

We only have to read the signature using a public service key.

To begin, let us transfer the key to hex-representation (picture 3).

Picture 3. hex-representation of the key

Then we generate a signature using openssl (picture 4).

We add the value E1R1nWNsO-H7h5WoYCBnm6c1zZy-0hu2VwpWGMVPK2g to an already existing box, and our token looks as follows:

We insert our public key into “secret” on jwt.io, and, as we can see, JWT goes through verification successfully (remember to check the box “secret base64 encoded”!) (picture 5) 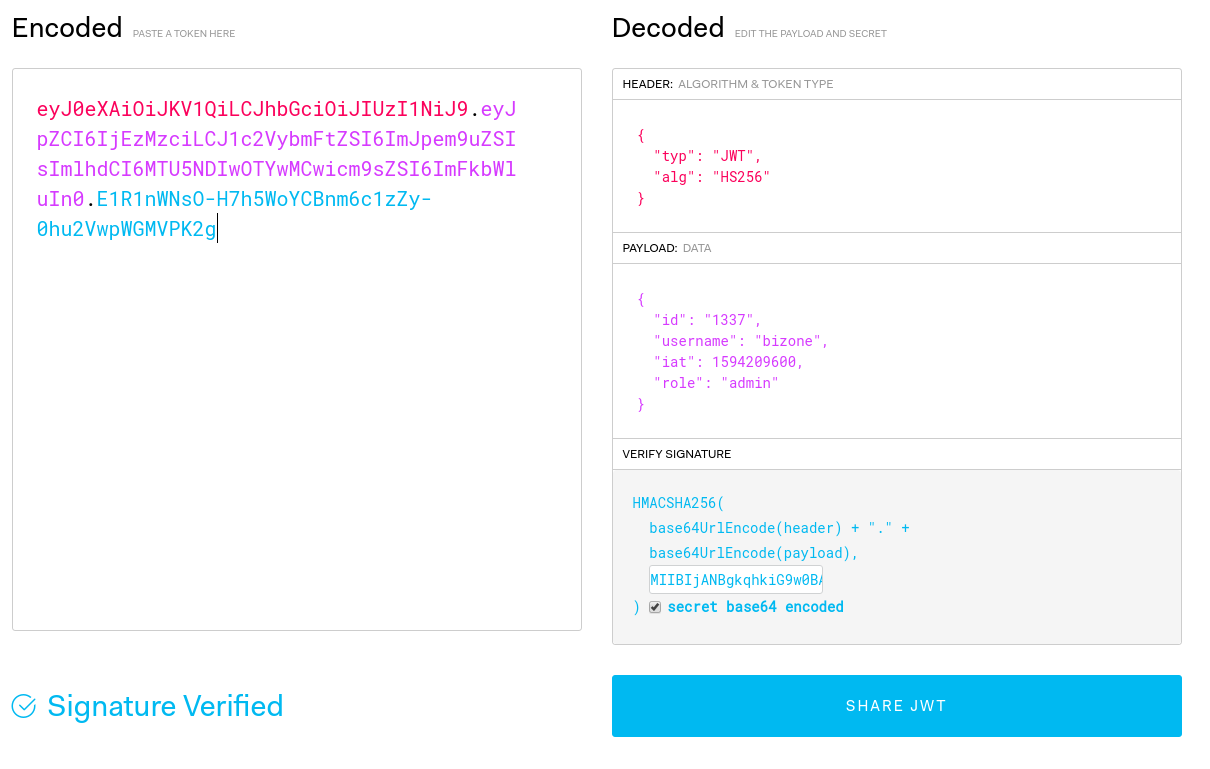 To prevent this attack, we recommend:

RFC-7515 standard describes “kid” header parameter (Key ID, key identifier). This standard also states that the format of this field is not strictly defined, so the developers can interpret it to their convenience, and this often leads to various mistakes.

Let’s take the following JWT header as an example:

We suppose that for token verification a key with 1337 identifier from the database will be used here. In case of encoding errors this field can be vulnerable to SQL injections:

In this case “SECRET_KEY” box will be used as the key phrase instead of a potential key from the database to verify the key signature.

In the next example we suppose that a key from “keys/service3.key” file will be used to verify the token.

There is a possibility that in case a parameter is not validated, a criminal can perform Path Traversal (Directory Traversal) attack, and instead of a potential route to the file he can transfer a route to a public file to the “kid” field:

The criminal can access “cat.png” file and sign JWT using the contents of this file, as this file is public (e.g., published on one of the service pages). The service, having received a route in “kid” field to “cat.png” file uses its contents as a key file to verify the token signature (that will be successful as the criminal has taken care of that beforehand).

A recommendation to prevent such attacks is simple:

JSON Web Tokens are very popular and are highly regarded for their convenience. If used correctly, JWT can prevent errors of inadequate authorisation, allow simple and easy distribution of information flows between the servers, organise a single entry-point for various services with the same login data and even increase the service efficiency.

However, if misused, this technology may put entire systems at risk, which may even result in an all-out compromise of the login credentials for all system users.

To conclude, in order to make the JWT use safe and secure, it is recommended to: